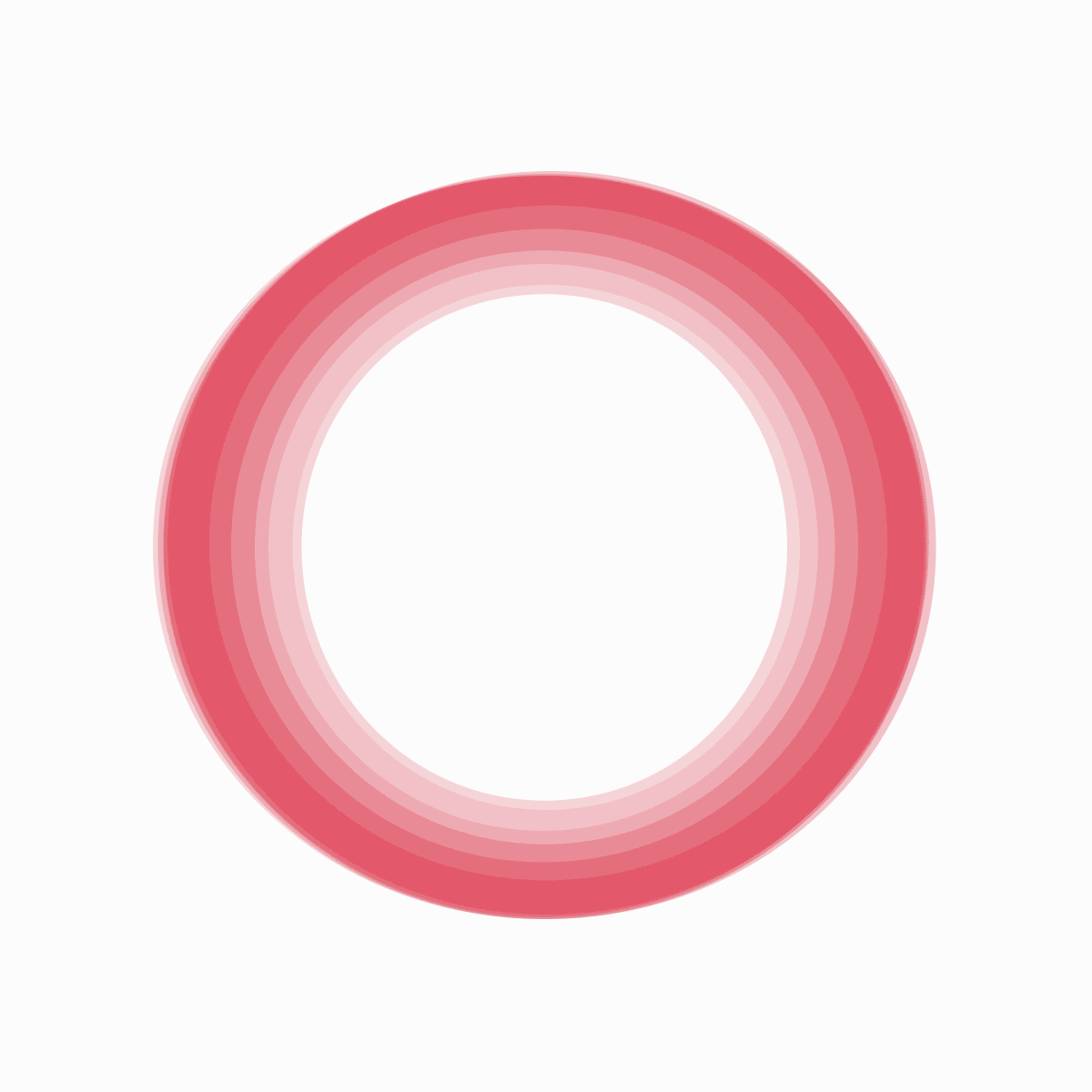 Nearly two years have passed since the initial introduction of Variable Fonts. This extension to the OpenType font format is receiving a lot of attention, and for good reason. In a nutshell, all styles in a typeface, for example light, regular and bold, can be combined into one font file. Neat. But not only can the user select those included styles, but also use any weight in-between. Interpolation between styles is in no way limited to only weight, but can affect any number of aspects of a typeface, like serifs, contrast, x-height, or any other arbitrary parameter. This flexibility is what we will come back to in just a second. In the very short time since the initial announcement in 2016 font tools and design software have adapted to make it possible to create and use this new flexible font format. With Microsoft and Google involved, Variable Fonts have made swift appearances in major browsers and are now fast approaching a point of mainstream acceptance that makes the technology viable for use in the wild. In fact, one of the motivations for Variable Fonts is the possibility to bundle several font styles into one, overall, smaller file. This is particularly interesting for the typographically sophisticated websites that have become common place since the introduction of webfonts.

This web-centric approach to Variable Fonts can in part be seen as what makes this format viable — this time around. In the history of font technology, similar ideas have been proposed, implemented, and slowly dwindled to irrelevance before. This far, however, Variable Fonts have been greeted with a lot of excitement. Seeing the possibilities of this new font format in action on various testing sites has generated a fair amount of buzz that is seeping from the world of type design into the broader sphere of visual design. Some foundries have re-released their existing font families as experimental Variable Font versions to test the waters, while others experiment with the availability of new, uncommon design parameters. With type designers now involved, support available in design software (owing to Adobe’s involvement) and major browsers, the next question that arises is how to actually get your hands on Variable Fonts. 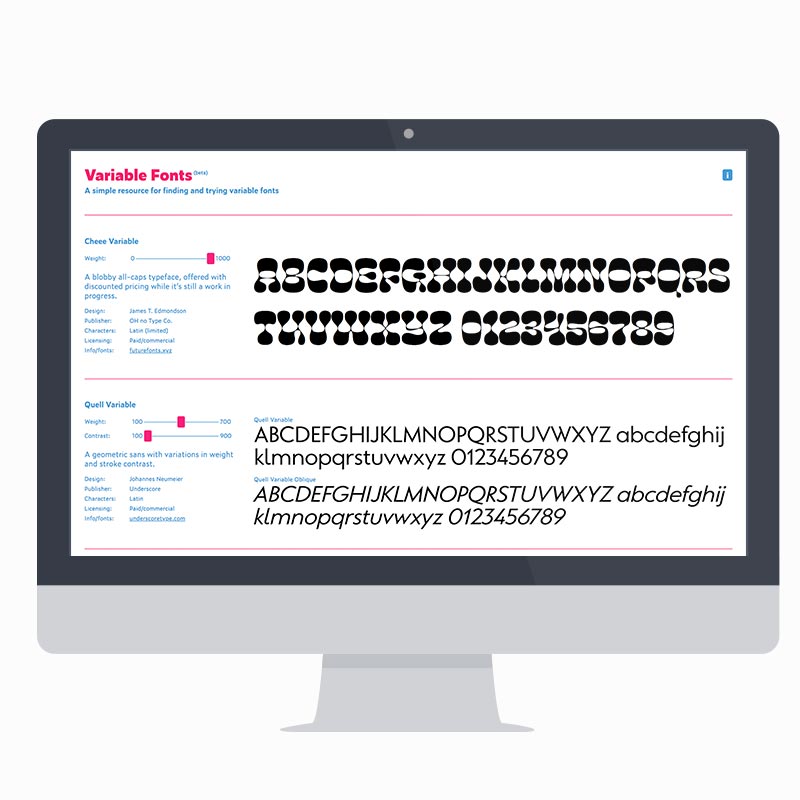 For an interactive list of Variable Fonts to test in your browser check out v-fonts.com.

One font is all the fonts

In regard to using Variable Fonts online the forerunners have been Open Source initiatives that embrace the newly available tools to explore flexible fonts. Open Source Variable Fonts with considerable exposure have been commissioned and re-released by two of the partners involved in the development of the Variable Font standard, and also type designers have been raising awareness with designs that explore the new possibilities of the format. To date the most successful distribution of fonts using the new technology have been either as Open Source and free of charge, or through TypeKit, Adobe’s font distribution application which bundles those fonts at no extra cost with its subscription service. The question that arises next is what also kept me pondering with the release of Quell, the first Underscore typeface to include Variable Fonts in addition to conventional font formats. Getting back to the initial observation of practically infinite stylistic options the question of how to license Variable Fonts gets complicated. While one Variable font includes, for example, Thin, Regular and Bold, it will automatically include all the possible styles in between. As common with larger typeface families, weights, widths and other styles are usually sold either as single fonts, or bundled as family including all styles. By their very nature, Variable fonts include all styles, so from a type foundry’s perspective that is licensing those fonts, the price point should follow that of the entire family. Or to put it by measure of investment to create, a font interpolated form several master extremes, and a Variable font, require identical work.

This logic is not a problem for those designers who are anyway interested in the entire family, either because their project will use a number of styles or they want to maintain the flexibility of switching styles as needed. Having the added benefit of being able to not only use the explicitly defined styles, but anything in-between surely is only a plus to them. However, the incentive to buy entire family packages is often also motivated by simple pricing logic. You might not need all the styles in a family, but foundries have various reasons for nudging clients toward family packages. Making a bundle of all fonts of a family less expensive than the sum of individual styles can motivate customers to buy more styles than what they concretely know they will use. The motivation for this, from a foundry perspective, is not just a simple up sale — although, and let us be frank about this, it is also that from a business perspective. More importantly though, as types designers making fonts, family ranges are well thought-out typographic systems. A lot of times goes into optimising how different styles correspond to and supplement each other. Giving visual designers those fonts as the tools for their expression is something that is at the very heart of anybody involved in making typefaces.

Animating Underscore’s Variable Font Quell on weight and contrast axis.
So far, so good. But how does this relate to Variable Fonts? The reality of licensing fonts is often one of opportunistic purchases, buying selected styles only or returning later to buy others when needed. And this is great as it gives customers the flexibility to license as they wish. Designers can be very specific with the styles they want to pick, or only want to try a particular font weight, and from a licensing perspective that makes sense for both parties. It gets problematic when circling back to Variable Fonts, and their economic viability for font foundries. When providing Variable Font versions as an added bonus to a purchase of the entire family, the customer is already buying the full range of a typeface anyway. Granting them the added benefit of complete flexible interpolation is also added value, but for now will hardly have huge impact on that purchase decision. To take advantage of the new format, however, seems to not be a reasonable option to offer for licenses other than that of the entire family.

Missing out on user experience

Variable Fonts are a technology that makes managing and installing fonts, using them in design applications, and loading them in online context more efficient and user friendly. This should clearly be equally desirable from user and foundry perspective. However, since technically any Variable font includes a range, possible the entire range, of a typeface family, the standard licensing of single font styles simply does not apply. And this is worrysome for the adaption and viability of this great new font technology is the incompatibility with current licensing models that are much more favourable to selective font purchases. Let’s take a concrete example. A website might use a condensed light, a regular and a bold italic for highlighting — loading a single file with all three fonts included as one would yield better load performance and be easier to handle from a development standpoint. If a single style costs 29€, or the entire family 350€, only licensing the required styles is obviously more economic. To take advantage of Variable Fonts would, from a font licensing position, mean justifying the purchase of a Variable Font that spans the entire family — and that is most likely cost prohibitive if Variable Fonts are priced equal to family bundles.

Options for the Variable Font future

Some more or less hypothetical consequences from this arise. Since the technology and market for Variable Fonts are still in their relative infancy there is bound to be exciting future developments. However, rough scenarios could be among the following: All in all Variable Fonts are an exciting step into a direction that is inherently embedded in modern type design technology. With user adaptation it will become more clear what are the use cases and market for this new format, but for now, most of the conventional font retailers are scrambling for viable licensing and pricing models that are bound to increase, not inhibit, the spread of Variable Font usage. So far type designers and foundries have been more concerned with the how and when of Variables Fonts, but one of the largest implications of this format is neither technical nor creative: Giving users control over the entire family span of a typeface prompts redefining what a font is, and what is the value it brings to customers. Have you used Variable Fonts, or you are a type designer making Variable Fonts? Involved in font technology or font business otherwise? I would love to hear your opinions and commentary on what I think is a critical issue related to this new technology and its adaptation. Discuss with me here or on twitter @underscoretype.